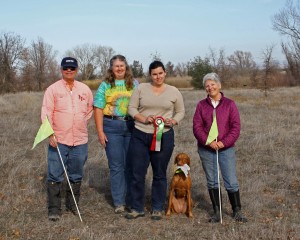 The workers who arrived early on Sunday morning were treated to a beautiful sunrise with gorgeous orange sky displayed through the branches of the deciduous trees around the pond at Mather Regional Park. After very warm, sunny weather on plotting day, the weather took a turn for the better on test day – slightly overcast with negligible wind and a high in the mid-60’s.
Unfortunately, the ground cover, which is normally lush and green this time of year, was dry and brown due to our record-setting dry winter. This presented different tracking challenges than we normally see in our Sacramento tracking tests.! 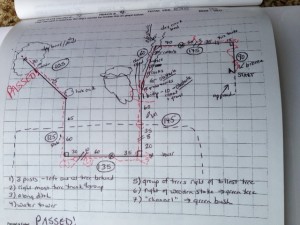 The Test Secretary and Chief Tracklayer were very efficient and kept the test on schedule. The draw for running order was done promptly at 9:45 am and the first team was in the field and  ready to go at 10:00 am.!

The first dog was a Bassett Hound from Woodside, CA. The Bassett started well, then
struggled a little just short of the first turn. After working through the issues, she moved briskly down the track passing the cross tracks, finding both intermediate articles, and making 3 turns. Then the dog/handler team faced the most challenging obstacle. The track dropped down into the middle of a dried-up creek and turned left. Sadly the team was unable to work through this challenge and they heard the whistle. !

The second dog was a Bernese Mountain Dog from Boise, ID. The Bernese had a hard time starting and didn’t make it through the first turn before hearing the whistle. After the whistle she tracked  beautifully but there are no do-overs at a tracking test!!

The third dog was a Smooth Collie from Menifee, CA. The Collie moved out quickly from the start flag – the gallery was sure this was going to be a pass. The Collie made the first two turns, passing the cross tracks and finding the first intermediate article. Then the team faced their most challenging obstacle: the track turned and crossed a paved road into loose gravel. The Collie made it across the road but didn’t continue into the gravel. The team struggled. Eventually the Collie turned in a parallel direction to the track, intersected the true track but didn’t take it. The judge blew his whistle.!

The fourth dog was a Vizsla from Del Rey Oaks, CA. The Vizsla, Soolie, ran a fun track with a few difficult areas. Sooli’s style is not “head down, pull hard.” Instead she tends to go back and forth across the track while moving forward. She found the first corner and started down the second leg, crossing a gravel road, heading toward the area downstream from the dam. On that leg, she found her first intermediate article, a glasses case. Normally, the area where leg 2 turned is under water, but not so in this drought year. The track meandered through cattails and pennyroyal until it reached the dam. The track climbed back up to the dam road over rocks. At that point, the track crossed over the culvert, diagonally to the left, and went into the field. Sooli worked hard (rolling on a dead fish in the process) before finally crossing the road and picking up the track. At the next corner she found GOPHER HOLES, which she dutifully indicated…and indicated…and indicated. Once the handler finally called her off, Sooli searched for the new leg but found more gopher holes. Finally, she found the track and got the second intermediate article, a black sock. On they went to the next corner where Sooli noticed more critter holes but finally made the turn and pulled down that leg of the track. The next turn came at the base of a tree, back in the area that is usually under water. The track turned left at the tree, but Sooli overshot the corner. After searching she came back and found the final leg, which meandered,
again  through dead grasses and ultimately straightened out, leading her to the glove. YAY!!! The first pass of the day.!

The tracklayer, Sharon Prassa, commented: “ It was terrific to see such nice handling. Her owner had the right combination of patience and persistence to interrupt Sooli’s critter discovery. Needless to say, I was elated when they found that glove. Turns out Sooli had gotten her AKC Senior Hunter title just two weeks beforehand.”!

The fifth dog was a German Shepherd Dog from Napa, CA. The GSD started slowly but progressed nicely past the first set of cross tracks and the first two turns before making her way to the coyote bushes, the first major obstacle on the track. Unfortunately the GSD didn’t want to enter the bushes and went too far right along the front of the bushes to recover. The judge blew the whistle.!

The sixth dog was the second Smooth Collie of the day, handled by the same person who ran the third track. Some days the odds are stacked against a dog, and sadly this was true for the Collie. This track, and only this track, was within hearing range of both the shooting range and the model airplane facility. Extremely sound sensitive, the Collie was obviously stressed by the sound of rifle shots and did not want to leave her handler. To the relief of the handler, the judges finally blew the whistle when it became painfully evident the Collie would not be able to overcome her stress.!

The other five dogs will go on to track another day and earn their TDX titles.!

Our judges this weekend were Sil Sanders and Kyla Smay. They plotted some interesting and challenging tracks and were very supportive of the participants. !

A TDX test wouldn’t be possible without the many volunteers who give so freely of their time. Thank you so much to the following workers:! 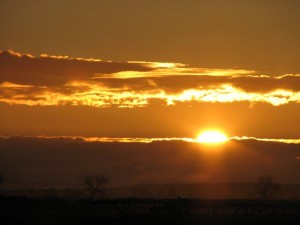 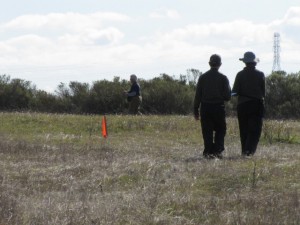 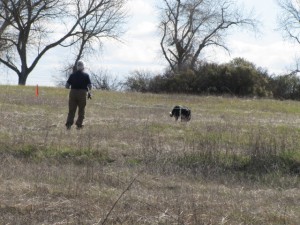 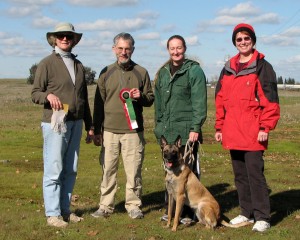