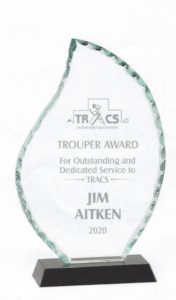 THE TRACS BOARD PROUDLY PRESENTS 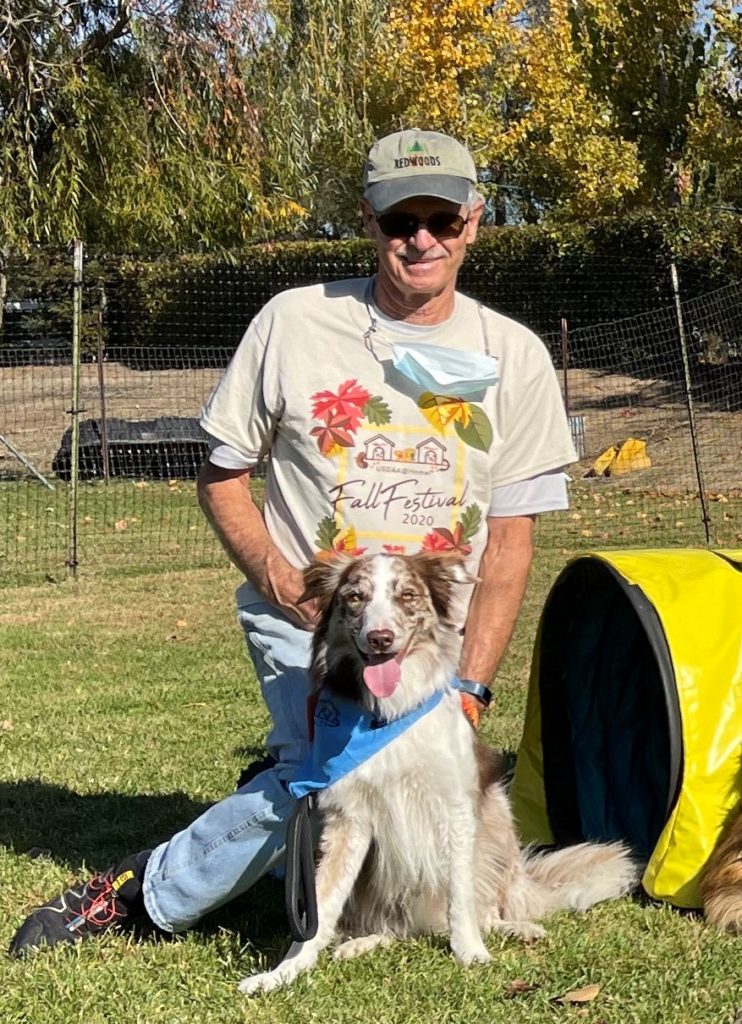 Jim was recognized for his years of dedication to the club. In addition to being a very active member at all our agility trials, he has filled the role of Equipment manager for 14 years; has been our Webmaster for over 10 years; and served as a Club Officer and Board member for six years. You can read Jim’s full nomination here.

Thank you, Jim, for your years of work that has helped make TRACS the best AKC Agility club in California!

In addition to being a very active club member, Jim Aitken has taken on many roles in supporting the club over the years:

• HE has filled the role as Agility Equipment Manager for 14 years. In this role:

++ He managed to keep up with the seemingly ever-changing equipment specifications of both AKC and USDAA.

++ TRACS’ reputation of being a club that always recognizes the importance of equipment safety is directly attributable to Jim’s program oversight. He always ensured our equipment was as safe as possible for our dogs. One example of this: when metal jumps were identified as being dangerous for the faster, tighter turning dogs in agility today, he not only purchased all new PVC wing jumps, but also took it upon himself to purchase parts and build all new wingless PVC jump standards.

++ He never failed to see an equipment need and then come up with a solution, always ensuring TRACS was compliant within equipment specification deadlines.

++ He managed the re-homing of our ‘retired’ equipment in a manner to offset some of the expense of our new equipment acquisitions (metal jumps, tires, tunnels, teeters, etc.) or to support other club functions (Worker Raffle).

++ He realized that the TRACS equipment trailer needed better organization as the club increased and changed our equipment inventory. To this end, he evaluated the changing load requirements, then modified built-in racks and purchased storage bags and containers to more safely transport the equipment. This reduced the chance equipment could shift and get damaged in transit.

++ He developed a load plan for the Agility Equipment trailer. This plan enables anyone to step in and to guide others in the monumental task of loading the thousands of pounds of agility equipment at the conclusion of each trial.

• HE has hauled our Agility Peripherals or Equipment trailers to events for 14 years (the white peripherals trailer from 2007-2014, then the red equipment trailer from 2014 – present), whether he had a dog entered or not. For him, this always meant two round trips to the event, and two round trips home from the event, as he hauled either TRACS trailer plus his own RV trailer so he could stay onsite to address any equipment issues through the duration of our events.

• HE designed and built storage shelving and racks for the white trailer, making the organization and loading of that trailer as efficient as it could be.

++ he developed and executed a total rebuild of the TRACS website, making the website more user friendly and functional that the previous version.

++ through the years he migrated the club to various communication platforms (yahoogroups, googlegroups tools). This improved our ability to stay in touch with each other.

• HE’s an exemplary volunteer at the TRACS tracking events too!  A good-luck tracklayer!